For the last several years, the NoMa BID has worked to identify ways to overcome the omission of parks in the original planning for NoMa. The NoMa BID, building on the DC Office of Planning’s Small Area Plan for NoMa, the NoMa Vision and Development Plan of 2006, has invested significant resources in creating, with strong community engagement and consensus, visionary park plans for NoMa:

Community engagement activities that have occurred in 2014:

The NoMa BID hosted public open houses to discuss the future of public space throughout the NoMa neighborhood as part of the parks planning effort that began in 2011. Community input was relied upon to develop a public realm framework. This framework, published in 2012 as the NoMa Public Realm Design Plan, identified a system of signature open space opportunities and streetscape enhancements intended to connect and support the rapidly changing neighborhood.

Summary of comments from the 2012 community meeting on potential uses for L Street Plaza.

Community input received during the 2011 planning process prioritized the following as characteristics that the community highly valued for NoMa parks: 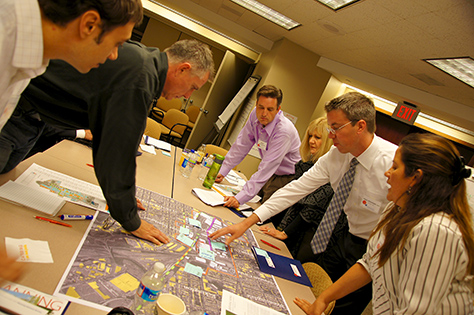 Projects that addressed these aspirations found expression in the NoMa Public Realm Design Plan’s with its unique approach knitting together public and privately-owned spaces in NoMa. Without this public-private approach as its centerpiece, the cause of parks in NoMa would have been doomed.

Acknowledging the importance of the effort that started in 2011, and the strength and quality of the NoMa Public Realm Design Plan (Plan), the District government adopted the Plan and references it in the NoMa Parks Grant Authorization Act. Accordingly, the Plan is now the official framework for the District’s NoMa parks investments and is the basis for activities authorized in the October 15, 2014 Grant Agreement.