As of Thursday, June 25, 2020, all parts of Alethia Tanner Park are now open! The park, located at 227 Harry Thomas Way, NE, features a large lawn, playground, dog park, gardens and a meadow, plaza areas, and a connection to the Metropolitan Branch Trail. 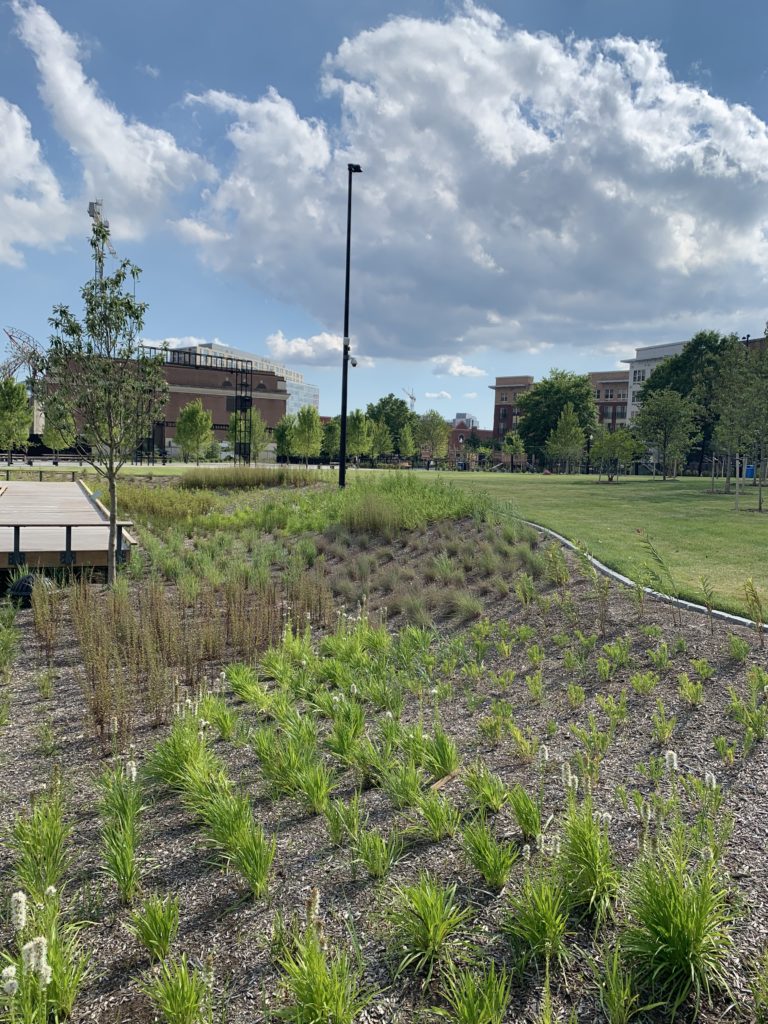 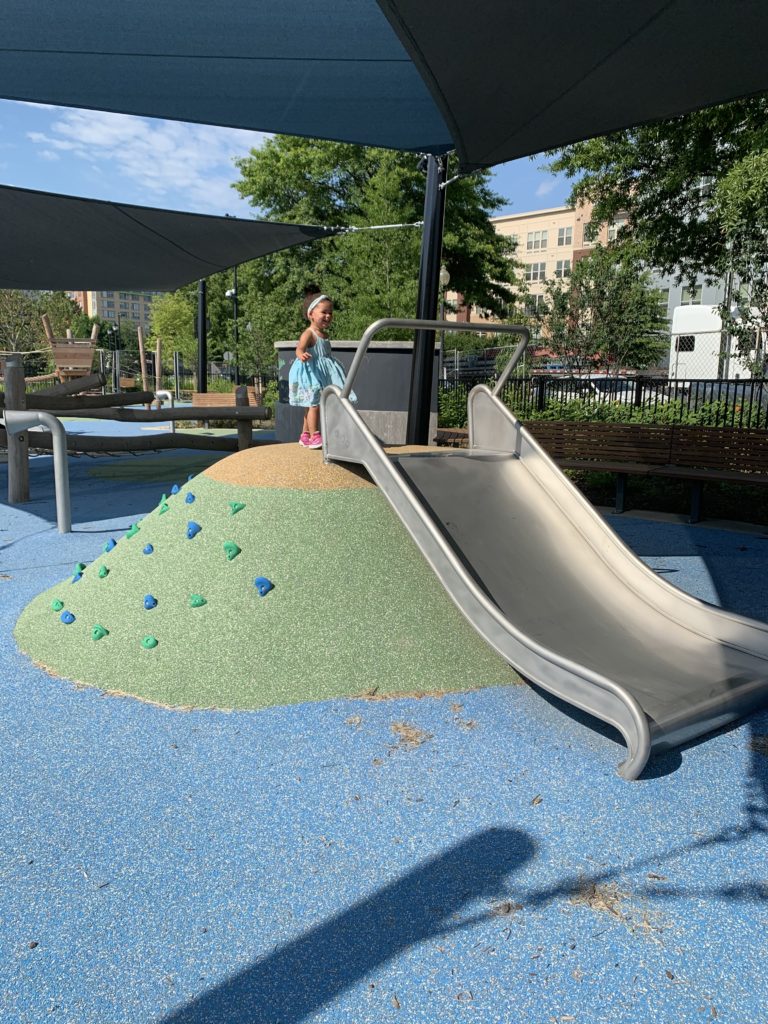 When visiting the park, please abide by public health guidelines posted at the park. These include wearing a mask, social distancing (standing 6 feet or more apart; no groups larger than 50 people), staying at home when you are sick, and properly disposing of waste. Please be mindful of the many users and types of users at the park and keep an eye out for people (and pups) walking, running, biking, scooting, rolling, wheeling, skipping, and cartwheeling around you.

The dog park is open daily from 7am-9pm. Dogs are enthusiastically encouraged to run off-leash in the dog park. Dogs are not allowed in the playground and must remain on-leash in other areas of the park, including the lawn.

The playground and other areas of the park are open from dawn until dusk. The Metropolitan Branch Trail (MBT) and MBT connection through the park are lit and open 24 hours a day.

You may notice some “rough edges” around the adjacent Foulger-Pratt construction. Those areas will be completed as the building completes, in early 2021.

We hope that one day we can all gather together for a grand opening celebrating our community and honoring Alethia Tanner. Until then, please enjoy the park, and tag your photos on social media with #AlethiaTannerPark!

In summer 2018, four possible names for the 2.5-acre space were presented to the community to vote on. More than 2,100 people participated in the online poll, and with 65% of the vote, Tanner Park was selected as the park’s name.

Alethia Tanner, who was born a slave in Maryland in the 1780s, purchased her freedom in 1810, as well as the freedom of many family members. She was a strong proponent of educational initiatives for blacks in the District. In addition to supporting several schools for free black children though her entrepreneurial ventures, including a produce stand in Lafayette Park, she funded the education of family members who would later be leaders in the city’s education scene.

History of the Park

In December 2015, the NoMa Parks Foundation acquired two acres of vacant land owned by Pepco. As envisioned in the NoMa Parks 2012 Public Realm Design Plan,  the park originally called “NoMa Green” will provide for outdoor recreation and community gatherings and serve as NoMa’s “backyard.” In May 2016, an additional half-acre of park space was acquired at the northeast corner, allowing for the softening of the R Street NE Z-turn on the Metropolitan Branch Trail (MBT). These transactions earned the NoMa Parks Foundation a “Best Community Impact” award as part of the Washington Business Journal’s Best Real Estate Deals of 2016. The NoMa Parks Foundation worked with the community during 2016 and 2017 to design the park. 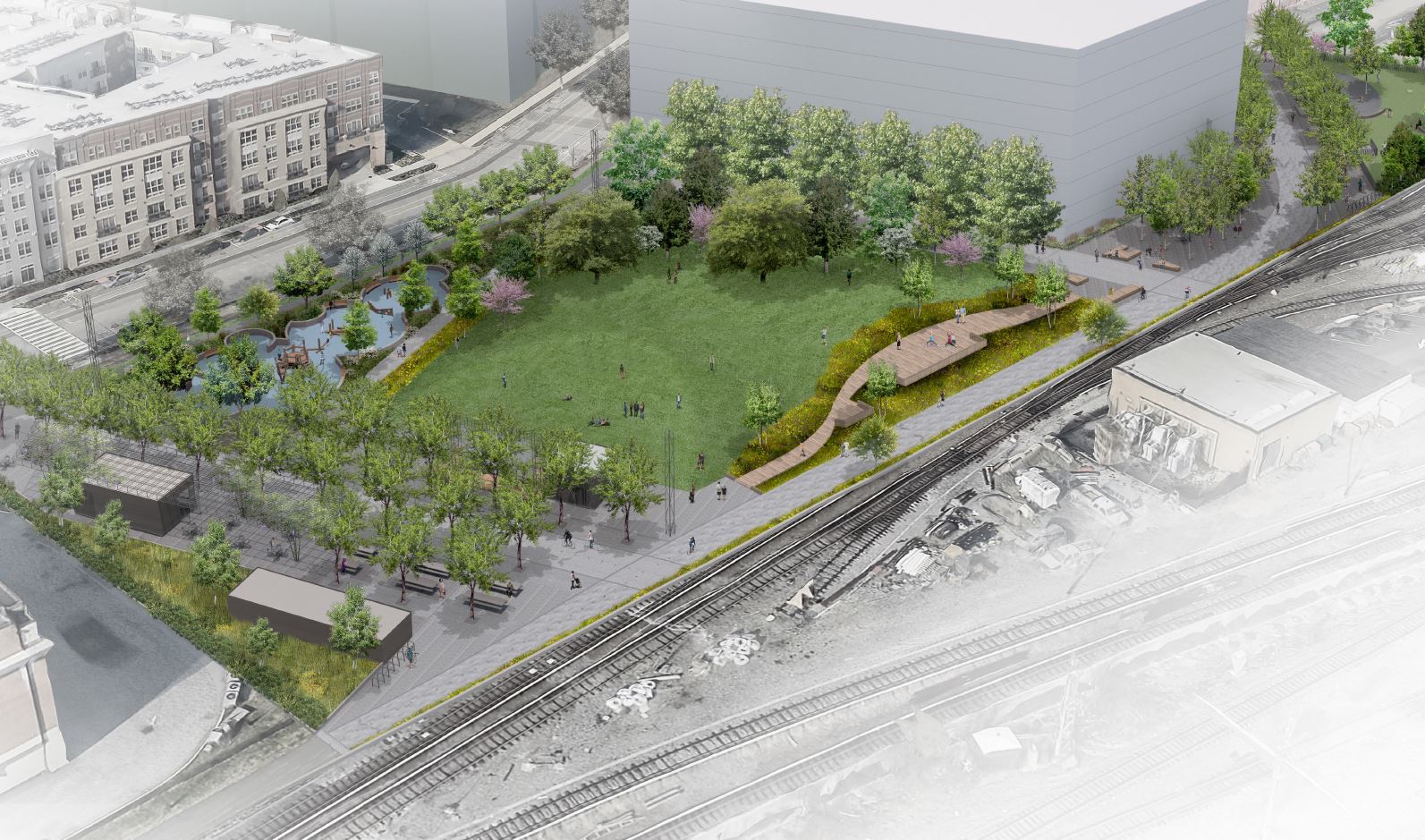 At a NoMa Parks Community Conversation on October 25, 2016, the NoMa Parks Foundation introduced Nelson Byrd Woltz as the selected landscape architecture firm to develop a concept design for the park. The firm was selected from a design competition; its initial design concept was based on the design developed for the competition. Over the next two years, Nelson Byrd Woltz worked to create a design that meets the community’s needs and interests in the park.

The NoMa Parks Foundation selected Forrester Construction to serve as the general contractor for the construction of Alethia Tanner Park. Work began in March 2019 and was completed in spring 2020.

North of New York Avenue, bounded by Harry Thomas Way NE on the west and the MBT on the east, this large parcel of land is the best opportunity to provide an expansive, open green space in the neighborhood. With its MBT adjacency and strong trail connections, the park will be easily accessible from many surrounding neighborhoods.

The NoMa Parks Foundation solicited and has received a great deal of community input over several years about neighborhood aspirations for this large green space. Outreach included more than eight community meetings, attendance at ANC and ANC committee meetings, and online input. Goals shared and implemented in the selected park design include a strong connection to the MBT, a large flexible green space, a dog park, and a meadow. The park also includes a children’s playground, flexible seating areas, a cafe kiosk, and a stage area.